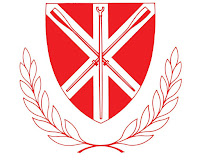 Those founding members had previously participated in Thames Meanders with other clubs in previous year and believed our club had grown to sufficient size to run a meander on behalf of our club.

Therefore in 2014 our club captain trailered his speed boat "Cousteau" up to Lechlade and launched just above its iconic Bridge.

It's mission? To seek out suitable moorings and accommodation for future intrepid skiffer's, rowers, canoeists, stand up boarders or in fact any intrepid water person who endeavours to complete the 44 locks & 125.5 miles of the navigable non tidal waters of the River Thames, affectionally known as the "Thames Meander".

Keeping to the antics of Jerome Jerome's Three Men in a Boat, lots of pubs were visited along the way and the next year SSPC hatched its first Club Meander, although gratefully helped by supporters and skiffer's from other clubs.

Only Meanderes who have completed the whole Journey, posing for Photos with "Old Father Thames"  at Lock 1 St Johns and at the gates of lock 44, Teddington qualify to be members of the "Official Thames Meander Club" owned by SSPC. 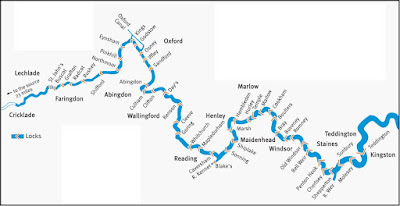 The journey is completed in traditional Thames Skiffs crewed by a minimal of 3 people. 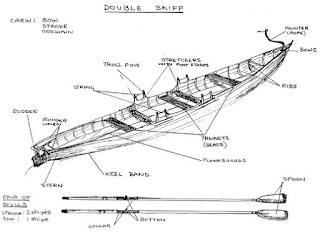 Posted by Sunbury Skiff and Punting Club at 04:45:00 No comments: